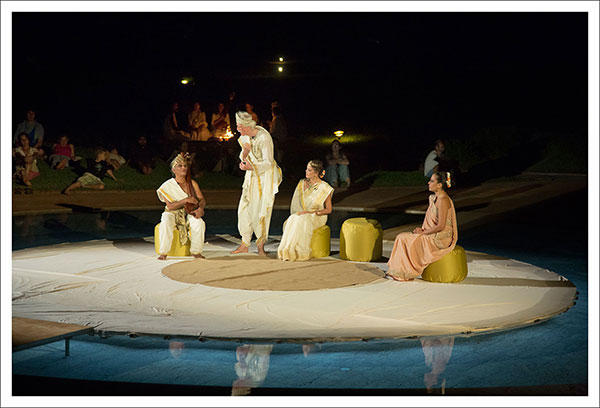 King Aswapati (standing) discusses the fate of Savitri with Narad, the heavenly messenger, while the Queen and Savitri look on. On August 16th and 17th, there was a theatre presentation of Scenes from Sri Aurobindo’s Savitri in the small amphitheatre in the Unity Garden, close to the Matrimandir and the Banyan. Three key moments from the poem were focussed upon – the meeting of Savitri and Satyavan, Narad’s revelation that Satyavan would soon die, and the dialogue between Savitri and Death. At certain times, a narrator explained the deeper significance of the characters and the story and linked the episodes. Dramatising this epic poem is, of course, hugely ambitious. Nevertheless, there have been many attempts to perform Savitri in Auroville, through dance, recitation and music. In many respects, this latest performance was the most successful. Partly this was due to the magical setting of the Unity Garden amphitheatre, with the illumined pond becoming a stage and th...
>> More