In the intervening years, the Auroville Earth Institute has become one of the world’s top centres for excellence in earthen architecture, working in 35 countries to promote and transfer knowledge in earth architecture. The work of the Earth Institute has attempted to revive traditional skills and to link ancestral and vernacular traditions of raw earth construction with the modern technology of stabilised earth.

Compressed Stabilised Earth Blocks (CSEBs) are made in a manual press (designed and manufactured in Auroville) using a mixture of earth with 5% cement. Some of the advantages of using CSEBs for construction are that they can be made on site and their manufacture needs much less energy and reduces pollution (a CSEB uses 10.7 times less energy to make than a country fired brick). The Visitors Centre, Solar Kitchen, Vikas community, Realization community and Pitanga are good examples of their diverse applicability.

Since 1996, the Auroville Earth Institute, which is now representative for Asia of the UNESCO Chair “Earthen Architecture”, has been developing an earthquake-resistant technology with hollow, interlocking CSEBs. This technology was used extensively in Gujarat after the 2001 earthquake and received approval from the Gujarat and Tamil Nadu state governments as well as the Iranian government.

The Earth Institute also offers regular training courses that have been attended by thousands of students from 76 different countries since 1989.

For more info on training programmes in earth construction contact: 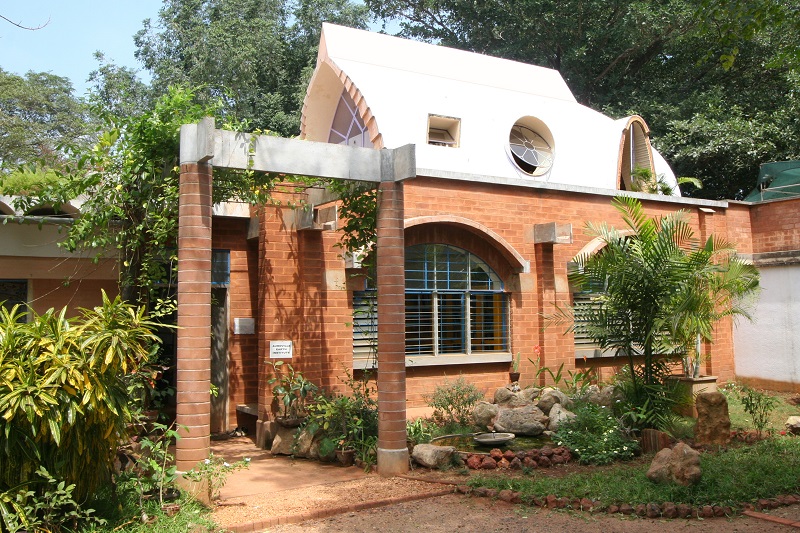